- December 05, 2014
Richard threw down the gauntlet again, this time with a sweet drawing by Reidar Kjelsen: 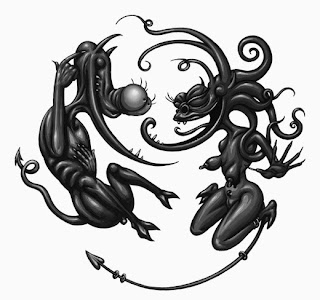 Normally the smallest of all known demonic beings, Sybevmry & Creqvg'n spend their time hitching free rides and generally having a life of ease amongst the strands and follicles of Cowie's unkempt hide. However, during the Dark Moon Festival (held every fourteen years in honor of Ywehbobbobhewy, Lord of Waters, King of Mirrors, Patriarch of the Most Profound) they are granted a boon: they enlarge to the size of small housecats and feed on the blood of the male sacrifices.

If encountered in their normal state, they are nearly undetectable. If a PC encounters Cowie and pets her, their is a 35% chance that Sybevmry & Creqvg'n will infest the PC for 1d8 days unless the PC makes a Save vs. Disease. The PC will suffer intense itchiness of the crotch and/or armpits and permanently lose 1 HP for each day of infection. There is no cure. After the rolled duration, Sybevmry & Creqvg'n will immediately teleport back to Cowie's tail.

If encountered during their enlarged state, they will happily converse with PCs unless they are feeding. They love to gossip and will relay the juiciest of rumors and hearsay; there is a 75% chance that what they tell the PCs is true. However, they also heavily enjoy riddles and puns and in-jokes that only they themselves understand, and thus often interrupt themselves as they descend into bouts of raucous laughter, to the puzzlement of those they converse with.

If they are feeding at the time of an encounter, they will immediately attack in a blood rage. They attack with their steel-like claws and shark-like bites. For each successful attack, the PC must make a Save vs. Paralysis; after 4 failed saves, the PC becomes paralyzed for 1d4 days and is also immediately infested with normal tail lice. This paralysis can be cured by magical means, but the lice infestation can only be cured with a thorough, non-magical delousing.

Sybevmry (the male) and Creqvg'n (female) are the last mating pair of quasi-demonic tail lice and are thus considered an endangered species; any attempt to destroy them via delousing rituals will result in immediate attack by Ywehbobbobhewy or The Jale God.

Unknown to Curdle & Cowie, Sybevmry & Creqvg'n are also (with the Jale God's blessing) spies for Tetskuize the Demoralizer, keeping Her Lichness aware of pair's movements across the planes.