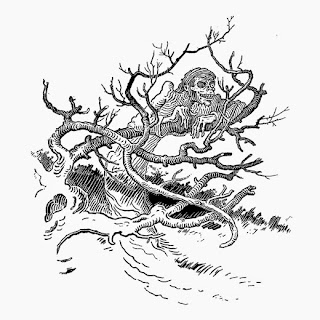 Ghostly Lecher
minions of the Petty Gods of Death

The ghosts of ancient mortals who were enamored with death when they were alive, Ghostly Lechers serve the gods of death merely as rubbernecking hangers-on, Wherever a gristly death has occurred, a Ghostly Lecher is sure to be found, feeding on the deathwave vibrations that emanate from the corpse.

As their name suggests, they especially prey on the gristly deaths of the young and innocent; they tend to congregate on the outskirts of gallows, ritual sites, sacrificial dolmens, and army barracks.

Although they seem to resemble Ghosts or Shadows since they have no corporeal body and seem to flicker, they are not undead creatures and thus cannot be turned. Ghostly Lechers can only be struck by magical or silver weapons. They are unaffected by sleep, suggest, or charm spells.

When a Ghostly Lecher is feeding on the deathwave vibrations of a recently deceased. they glow a pale-yellowish white and are easily detected. They will appear as if in a drunken or drugged stupor and move at their slower rate; they will miss half of their attacks if in this state. Also when feeding, they drool a poisonous ectoplasm that saps 2 hp (no save) per touch.

Ghostly Lechers are difficult to detect if they are not feeding; they surprise 50% of the time. When a Ghostly Lecher strikes, they deal 1d6 cold damage and 1 point of CON is drained for 6 consecutive turns. Should a character be drained to 0 CON, they have a 50% chance of becoming either a Ghost if of Lawful alignment, a Spectre if of Neutral alignment, and a Shadow if of Chaotic alignment, but remain a playable character, having gained the abilities of each respective monster.
community project Petty Gods