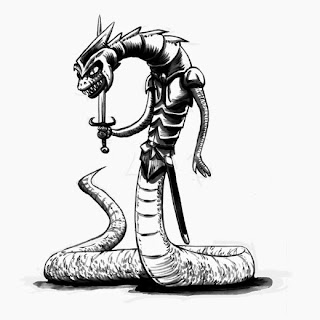 Ggiyy, Eidolon Knight of Hate
Knight in service to the Jale God

It is little known that the Jale God employs twelve knights to protect the 12 Eidolons scattered across the world and ensure their separation. Ggiyy, the Eidolon Knight of Hate, may be one of the only knights whose identity is fully known, as he is a frequent visitor to magical academies and royal courts throughout the realms. Although he often appears in human guise through the use of a polymorph self spell, Ggiyy is in truth a snake-like reptilian.

A wrathful and boastful warrior, Ggiyy has lost the location of the Eidolon of Hate and has been on a centuries-long quest to reclaim the stone. Many tribes know of his feats and the desert kingdoms curse his name for the havoc he has wrought among them. In his human form, he wears many different guises; sometimes he is a seductive woman, other times a handsome rouge, sometimes a washerwoman, etc. In this way he moves throughout the realms, but his passage is marked by the dissension he sows in his wake. Wherever Ggiyy has been, protests, fights, riots, and wars are sure to shortly follow.

Ggiyy wears elven plate on his torso, topped with an elven helm; the rest of his body is covered in thick, armor like scales. He is armed with a Sword of Doubt (1d8 damage + Save vs. Paralysis or be struck with indecision for 1d4 turns) and can choose to either swing his sword, bite his attacker (1d6 damage), or crush an opponent with his tail (1d6 damage + -3 to-hit).

Ggiyy prefers to surprise combatants from above, coiling himself around pillars, trees, or other heights, and dropping on his unsuspecting victims. If attacking in this manner, he automatically gains initiative on his first attack.

Under his armor, he wears an amulet that allows him to cast polymorph self at will; by an enchantment of the Jale God, the amulet only works for an Eidolon Knight.

Once a year he and the other Eidolon Knights must make an accounting before the Jale God in the Labyrinth of Myzithra on the island of Anari. He has been in disfavor for a very long time and this has done nothing to improve his mood.
community project Petty Gods