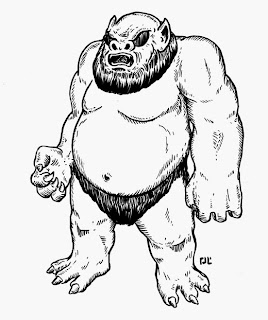 Bat-faced Strokechuckers
minions of Thwizeviblyz, Petty God of Baby Laughter, an aspect of the Jale God

Despite their bald-headed & bearded fearsome appearance, Bat-faced Strokechuckers are expert ticklers; they can sneak up to any child under the age of 3 and make them giggle with nothing but a soft touch across the chin, brow, or crook of knee or arm. They exist to serve Thwizeviblyz by eliciting peals of child laughter at unexpected moments, and are experts at this task.

Standing 4 to 6 inches in height, Strokechuckers appear squat and muscular, but this is an adaptive illusion. Like the common house mouse, Strokechuckers can squeeze themselves into the smallest of openings and, thanks to their tough claws, can climb vertical surfaces (up to 90 feet) with ease. They can also perform a 6-foot vertical standing jump. They possess the stealth skills of a 20th level thief and the power to cast invisibility at will, rendering them all but undetectable to the unwary eye.

As their name suggests, Strokechuckers resemble bats in more then just appearance; their eyes are extremely sensitive to light and they use echolocation to move through their surroundings. Strokechuckers can move through complete darkness with ease and gain +3 to all combat rolls which take place in dim or dark locations. They are primarily nocturnal, doing their work in the hours between morning and evening twilight.

They are easily blinded by sudden bright light and will immediately make themselves invisible if startled; their invisibility is such that they cast no shadow.

Strokechuckers prefer to flee rather than attack, especially if encountered in groups of 3 or less. If attacked, Strokechuckers perform a series of blazingly fast, complex, bare-handed maneuvers which, due to the millions of featherlike cilia covering their hands, result in a paralyzing tickle. Victims must Save vs. Paralysis or be pleasantly stunned for 1d4 rounds. It is rumored that a swarm of Strokechuckers (500+) once brought down a young red dragon in just this manner.

Strokechuckers tend to nest in abandoned rat warrens and are fastidious housekeepers. In many regions, it is considered good luck to have Strokechuckers nesting in your home. Anyone leaving food out for Strokechuckers gains a +2 to all Saves vs. Paralysis for 1d6 days; this bonus turns into a -5 penalty if any Strokechucker is attacked while the bonus is in effect.
community project Petty Gods